Subscriptions are a GraphQL feature that allows a server to send data to its clients when a specific event happens. Subscriptions are usually implemented with WebSockets. In that setup, the server maintains a steady connection to its subscribed client. This also breaks the “Request-Response-Cycle” that were used for all previous interactions with the API.

Instead, the client initially opens up a long-lived connection to the server by sending a subscription query that specifies which event it is interested in. Every time this particular event happens, the server uses the connection to push the event data to the subscribed client(s).

We will be using PubSub from the apollo-server library that we have already been using for our GraphQL server to implement subscriptions to the following events:

You will do this by first adding an instance of PubSub to the context, just as we did with PrismaClient, and then calling its methods in the resolvers that handle each of the above events.

Great! Now we can access the methods we need to implement our subscriptions from inside our resolvers via context.pubsub!

The code seems pretty straightforward. As mentioned before, the subscription resolver is provided as the value for a subscribe field inside a plain JavaScript object.

Now you can see how we access pubsub on the context and call asyncIterator() passing the string "NEW_LINK" into it. This function is used to resolve subscriptions and push the event data.

The last thing we need to do for our subscription implementation itself is to actually call this function inside of a resolver!

Now you can see how we pass the same string to the publish method as you added in your newLinkSubscribe function just above, along with passing in the newLink as a second argument!

Ok, I’m sure you’re dying to test out your brand-spanking new Subscription! All we need to do now is make sure your GraphQL server knows about your changes.

With all the code in place, it’s time to test your realtime API ⚡️ You can do so by using two instances (i.e. tabs or windows) of the GraphQL Playground at once.

As you might guess, you’ll use one Playground to send a subscription query and thereby create a permanent websocket connection to the server. The second one will be used to send a post mutation which triggers the subscription. Now observe the Playground where the subscription was running: To apply the changes and update your Prisma Client API so it exposes CRUD queries for the new Vote model, regenerate PrismaClient.

Finally the Vote resolver needs to be included in the main resolvers object in index.js. 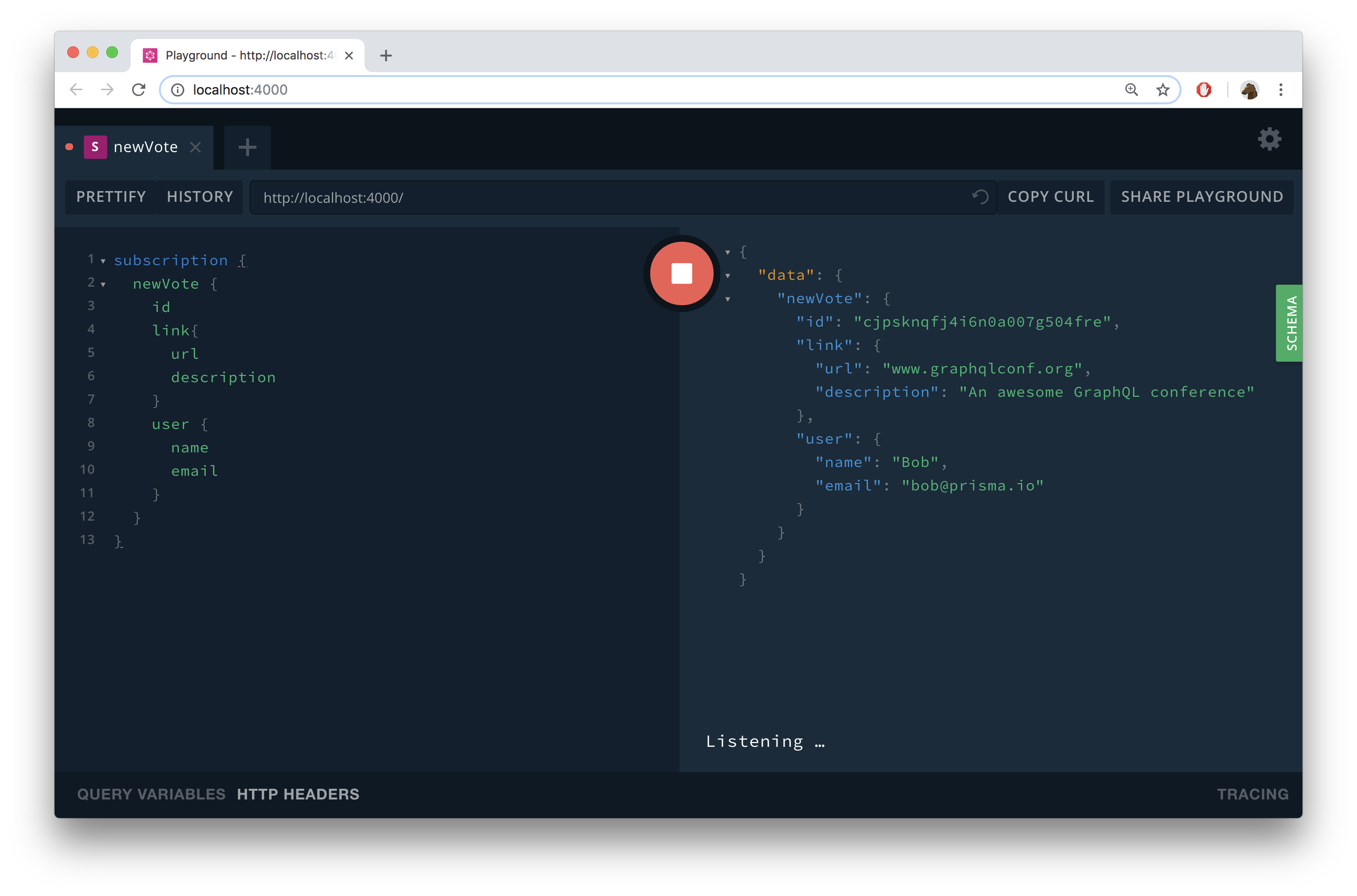