In this section, you are going to implement the first API operation that provides the functionality of a Hacker News clone: querying a feed of links that were posted by other users.

Now that you understand GraphQL schemas a bit better, let’s talk about the workflow you will be using when adding a new feature to the API. When working with a code-first tool like Nexus, the process will look like this:

Note: Sometimes step 1 and 2 might be iterative instead of linear. During the design and brainstorming process, it is easier to think in terms of the final GraphQL SDL than Nexus code. To convert an SDL to Nexus code, you can always use the Nexus SDL converter.

Extending the schema definition with the Link type

Now that you know the workflow, let’s write some code! Your goal is to implement a feed query that allows you to retrieve an array of Link elements.

You will start by creating the graphql module to organize all your Nexus code.

Now, you will define the Link type. To do this, you will use the objectType function from the nexus library.

objectType is used to create a new type in your GraphQL schema. Let’s dig into the syntax:

Pretty straightforward, right? You’re defining a new Link type that represents the links that can be posted to Hacker News. Each Link has an id, a description, and a url. Additionally, you defined all of these fields to be not nullable.

Now that you have defined the type, you need to hook it up to the makeSchema function that you created previously. You could import Link directly from src/graphql/Link.ts, but since there will be more types to add soon, let’s create a proper module structure. This is where index.ts comes in.

Since index.js or index.ts is accepted as the default entry point to a folder/module in Node.js, you can export everything from the graphql folder here. You can learn more about this behavior in the Node.js docs.

Now update makeSchema to use all the imports coming in from the src/graphql module.

Let’s go through the changes marked with comments:

Now let’s take a look at what has changed in schema.graphql:

Note: If you have a terminal running with npm run dev, your schema should get updated automatically. Otherwise, you can always run npm run generate to make Nexus regenerate your schema.

If you take a look at nexus-typegen.ts, you will see that it has a new Link interface as well. This is really convenient because the interface signature is identical to that of the Link type in your GraphQL schema.

Note: One of the major advantages of the code-first approach is that you don’t have to worry about having your GraphQL types and your TypeScript types going out of sync. Since Nexus is the source of truth that generates both, there is no risk of the two mismatching.

Now that the Link type is ready, you will create a feed query to return all the created link objects.

Alright, a lot of things are happening here. Let’s go through the numbered comments to understand what’s going on:

Note: You might be wondering why you don’t have to implement resolvers for id, description and url field for the Link type. This will be clarified at the end of the chapter.

Let’s check out the changes in the GraphQL schema:

The Query root type has two changes. There is a new feed field. Now that you have added a custom field to the Query type, Nexus is no longer providing a default ok field, so that has been removed.

In Apollo Studio’s documentation window, you should see the feed query as well.

Try out the code you wrote by sending the following query:

Awesome, the server responds with the data you defined in links: 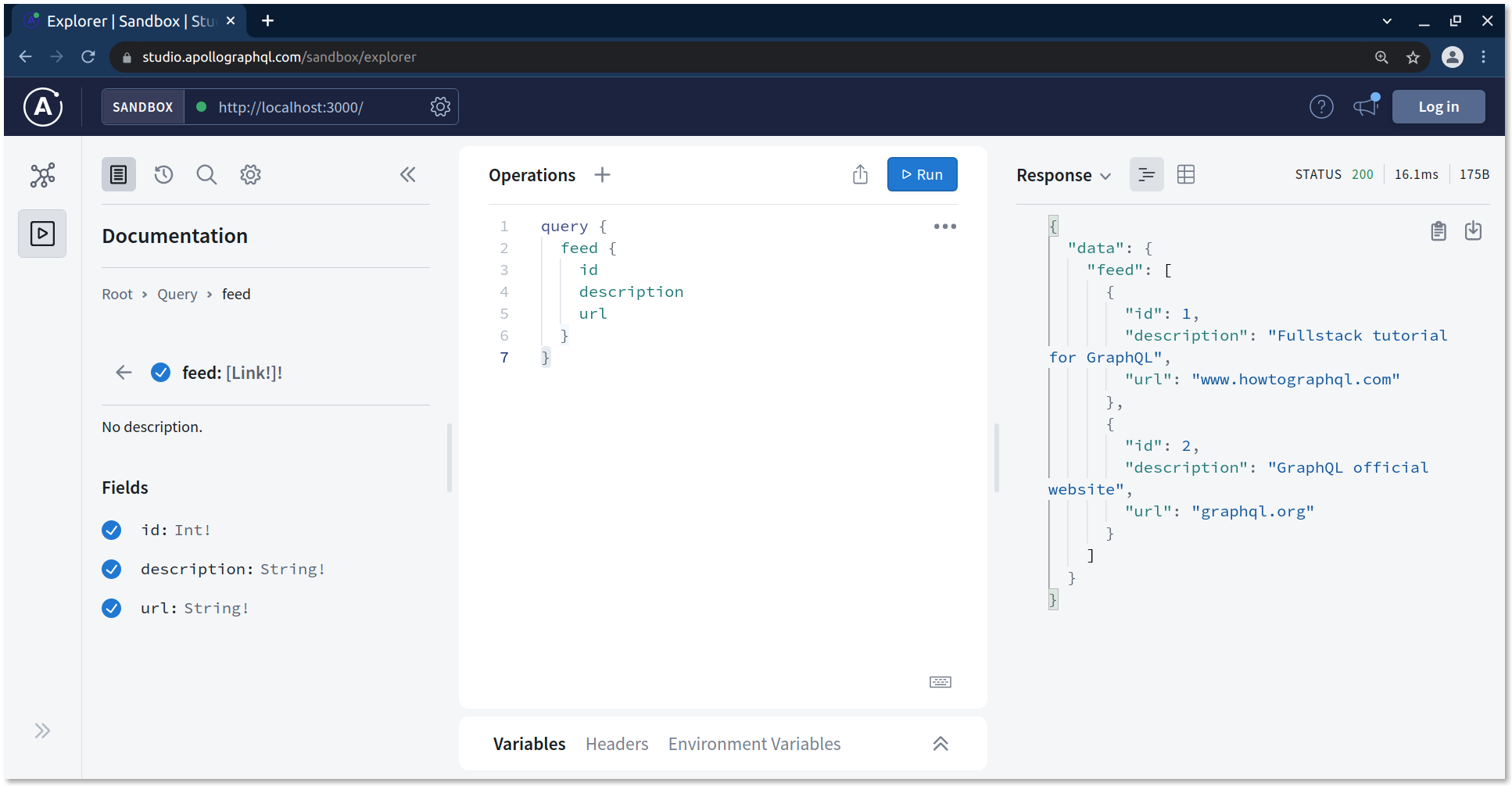 Let’s now quickly talk about how a GraphQL server actually resolves incoming queries. As you already saw, a GraphQL query consists of a number of fields that have their source in the type definitions of the GraphQL schema.

Let’s consider the query from above again:

It’s important to note that every GraphQL resolver function actually receives four input arguments. The first argument, commonly called parent (or sometimes root) is the result of the previous resolver execution level. Hang on, what does that mean? 🤔

Well, as you already saw, GraphQL queries can be nested. Each level of nesting (i.e. nested curly braces) corresponds to one resolver execution level. The above query therefore has two of these execution levels.

On the first level, it invokes the feed resolver and returns the entire data stored in links. For the second execution level, the GraphQL server is smart enough to invoke the resolvers of the Link type (because thanks to the schema, it knows that feed returns a list/array of Link elements) for each element inside the list that was returned on the previous resolver level. Therefore, in the resolvers for the three fields in the Link type (id, description and url), the incoming parent object is the element inside the links array.

Note 1: The word list and array are being used fairly interchangeably.

Note 2: If you’re having a hard time wrapping your head around the GraphQL execution process and order of execution, a nice example is available here.

One thing that’s still a bit weird in the implementation right now is the lack of resolvers for the fields in the Link type, namely id, description and url.

The reason that these fields do not need explicit resolver implementations is that the GraphQL type system is smart enough to automatically infer these resolvers. For example, the GraphQL server knows that the Link type contains the id field. So it will automatically resolve this field with the id variable available to each object in the link array.

In fact, many other GraphQL libraries will also let you omit trivial resolvers and will just assume that if a resolver isn’t provided for a field, that a property of the same name should be read and returned.

Note: To learn more about trivial resolvers, check out the GraphQL docs.