Subscriptions are a GraphQL feature that allows a server to send data to its clients when a specific event happens. Subscriptions are just part of your GraphQL contract, and they refer to events. To be able to send these events in real-time, you need to choose a transport that has support for that.

In this chapter of the tutorial, you are about to add GraphQL Subscriptions to your server, based on a transport called SSE (Server-Sent Events). This protocol is an extension of simple HTTP, with streaming and real-time capabilities, and doesn’t require any special setup or a new server (as described before, there are many options to implement subscriptions, like WebSockets).

Sever-Sent Events are a way to “upgrade” a basic HTTP request into a long-living request that will emit multiple data items. This is a perfect fit for GraphQL Subscriptions, and implementing and scaling is just simpler than WebSockets.

You’ll be using a simple PubSub implementation from the graphql-subscriptions library to implement subscriptions to the following events:

You will do this by first adding an instance of PubSub to the context, just as you did with PrismaClient, and then calling its methods in the resolvers that handle each of the above events.

Now, you’re adding the global instance of your PubSub and make sure it’s available for your during your GraphQL execution, by injecting it to your context, just as you stored an instance of PrismaClient in the variable prisma.

Great! Now you can access the methods you need to implement our subscriptions from inside our resolvers via context.pubSub!

Iterators in JavaScript bring the concept of iteration directly into the core language and provide a mechanism for customizing the behavior of loops. AsyncIterator is a built-in JavaScript types, that allow to to write iterators that might get the values updates in an async way (you can find more information here).

To get started with a new event, first make sure it’s declared correctly by the PubSubChannels. In this case, you are going to declare an event called NEW_LINK, and use the created Link object as payload.

Now that the PubSub knows our events and their payload, you can connect it to your GraphQL subscription resolver.

In the code above, in subscribe function, you are using the context.pubSub to create an instance of AsyncIterable that listens to the newLink event. This will be the trigger for our GraphQL subscriptions. So in case of an active subscription, the AsyncIterable will be created, and a listener for the events will be active.

Then, on every value emitted for that event, you’ll get our resolve function called with the event payload (that matches the structure that you use for our events declaration in PubSubChannels).

The last thing you need to do for our subscription implementation itself is to actually trigger that newLink event from our code!

Now you can see how you pass the same string to the publish method as you added in your subscribe function just above, along with passing in the newLink as a second argument!

Ok, I’m sure you’re dying to test out your brand-spanking new Subscription! All you need to do now is make sure your GraphQL server knows about your changes.

All you need to do in order to test your GraphQL Subscription is to open GraphiQL and try it!

With all the code in place, it’s time to test your realtime API ⚡️ You can do so by using two instances (i.e. browser windows) of the GraphiQL at once.

As you might guess, you’ll use one GraphiQL to send a subscription query and thereby create a permanent websocket connection to the server. The second one will be used to send a post mutation which triggers the subscription. 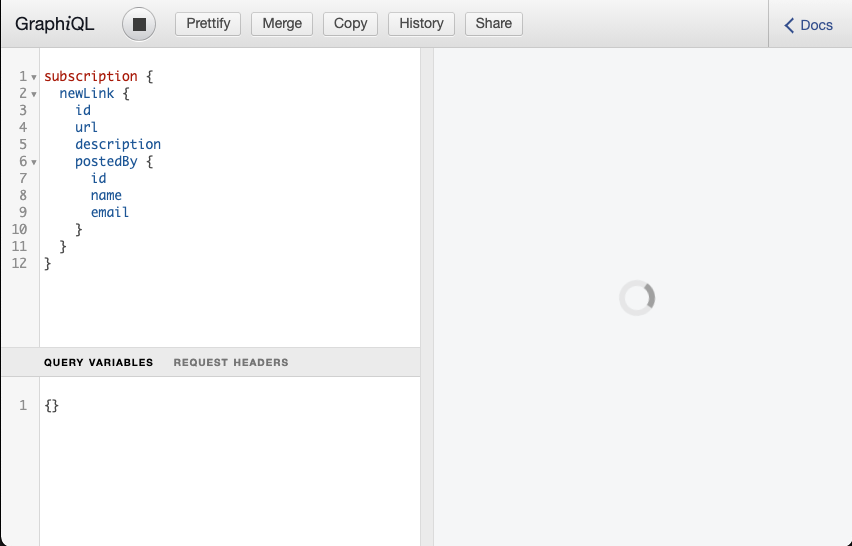 Note: If you see a loading spinner indefinitely, it maybe because of SSE disconnecting when the tab goes idle. Ensure that both the tabs are active.

Now, just like before, we’ll add the event to our typed PubSub.