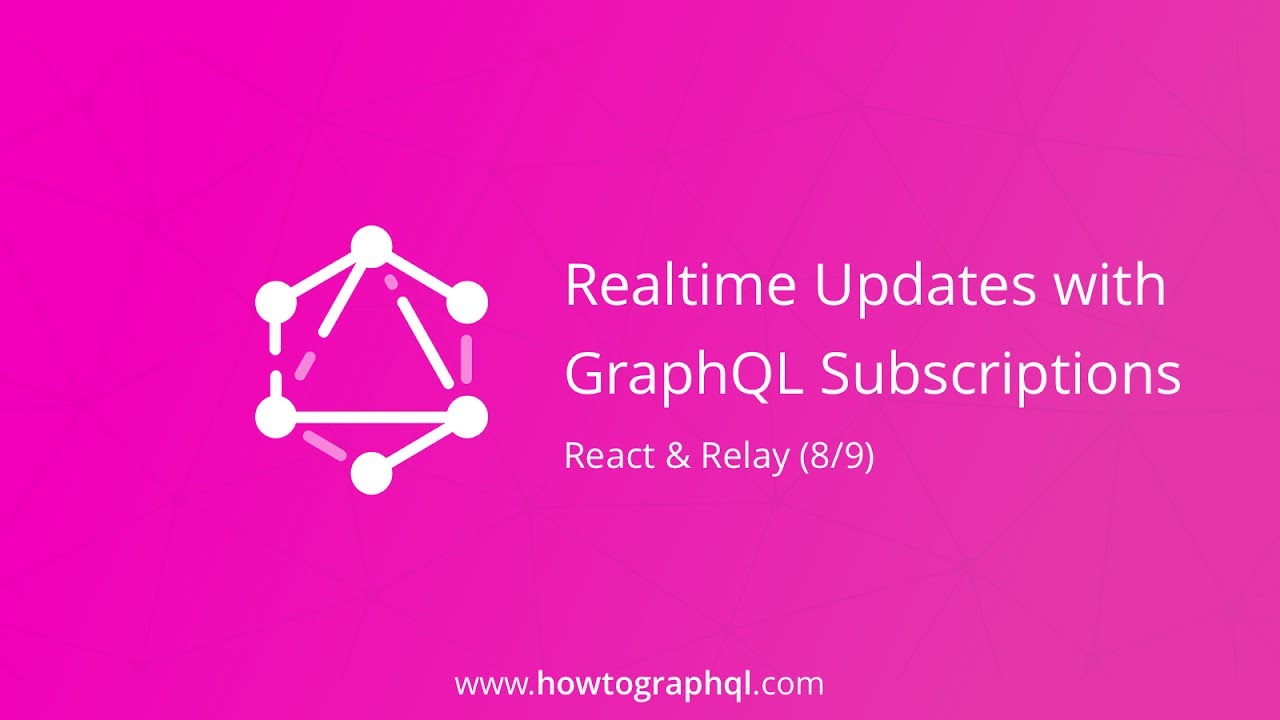 The goal of this chapter is to add realtime functionality to the app using GraphQL subscriptions. In particular, you’re going to make sure that when other users vote on a link, the link’s vote count updates immediately in the app for all other users without the need to refresh the page.

What are GraphQL Subscriptions?

GraphQL subscriptions allow you to add event-based realtime functionality to your app. A client can subscribe to specific events that are happening on the server-side. Then, whenenever that event actually happens, the server will send the corresponding data over to the client.

Events usually refer to mutations, so typically we’re talking about events where data was created, updated or deleted.

Subscriptions are somewhat different from queries and mutations, since they don’t follow a request-response-cycle but instead represent a stream of data. The most common way to implement subscriptions is by using WebSockets, where the server maintains a steady connection to the subscribed clients that it uses to send over the data upon each event.

Subscription support was only added to Relay with the release of Relay Modern. Client can now use the requestSubscription function to initiate a subscription.

requestSubscription works very similar to the commitMutation function as it also allows you to implement an updater functions to specify how you want the cache to update based on the new data that was received from the server.

However, in order to get requestSubscription to work, you also need to configure your Relay Environment accordingly and provide the URL for your subscription endpoint. If subscriptions are implemented with WebSockets, the subscriptions URL will contain the wss protocol instead of http.

Currently, subscriptions are only supported for the Simple API. However, you can still use subscriptions with the Relay API by making some manual adjustments to the schema.graphql which you feed into the relay-compiler.

Notice that we already did these manual adjustments for you and you already have them in your project as you imported the project from this URL in chapter 3. If you’re interested in what these changes actually look like, take a look at the Subscription type in schema.grahpql.

The first thing you need to do to get subscriptions to work is add websocket support to your project.

Note: We’re using a version 0.8.3 of the subscriptions-transport-ws package to be able to use the SubscriptionClient. The tutorial will soon be updated to use the latest APIs.

Next you’ll have to configure your Relay Environment and tell it about the additional endpoint that you want to use for subscriptions. The way how this works is actually by adding a second function to the creation of the Network. This function knows about the subscription endpoint and is able to initiate and maintain a connection to it.

If you’re not sure what your Graphcool project ID is that you need to replace the __PROJECT_ID__, you can open project.graphcool and check its frontmatter or execute graphcool endpoints in a terminal to see the endpoints for the Relay API and Subscriptions API.

To find the __REGION__ your endpoint is served from, go to your Graphcool console. Click the Endpoints-button in the bottom-left corner, go to Subscriptions API and replace __REGION__ with the region mentioned there (example: ‘wss://subscriptions.ap-northeast-1.graph.cool/v1/PROJECT_ID‘)

Awesome, your app is now capable of using subscriptions! ⚡️

Similar to what you did with the mutations before, you’ll implement each subscription in a dedicated file to provide a more convenient wrapper around the requestSubscription function that’s provided by Relay.

Let’s take a closer look at the subscription query that you’re storing in newVoteSubscription first:

Then of course you also need to add the corresponding import.

Before you’re running the app, you’ll need to invoke the Relay Compiler again so it can compile the graphql-tagged code inside NewVoteSubscription.js.

All right, you can now run the app with yarn start to test your subscription. The best way to test subscriptions is to use two different windows (or simply tabs) that are both running the app. If you then submit a vote in one window, the app should automatically update in the second window as well. 🎉